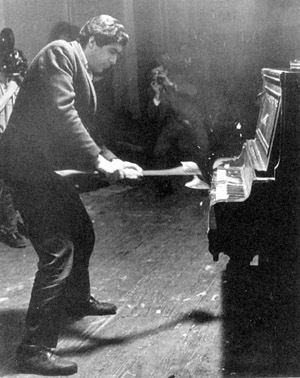 There are today throughout the world a handful of artists working in a way which is truly unique in art history. Theirs is an art which separates the makers from the unmakers, the assemblers from the disassembiers, the constructors from the destructors. These artists are destroyers, materialists, and sensualists dealing with process directly. These artists are destructivists and do not pretend to play at God’s happy game of creation; on the contrary, theirs is a response to the pervading will to kill. It is not the trauma of birth which concerns the destructivist. He understands that there is no need for magic in living. It is one’s sense of death which needs the life-giving nourishment of transcendental ritual.

We who use the process of destruction understand above all the desperate need to retain unconscious integrity. We point to ourselves and confess, shouting the revelation, that anger and anguish which hide behind the quiet face is in service of death, a death which is more than spiritual. The artist must give warning, his struggle must make a noise, it must be a signal. Our screams of anguish and anger will contort our faces and bodies, our shouts will be “to hell with death,” our actions will make a noise that will shake the heavens and hell. Of this stuff our art will be, that which is made will be unmade, that which is assembled will be disassembled, that which is constructed will be destructed. The artist will cease to be the lackey, his process will cease to be burdened by a morality which only has meaning in reality. The artist’s sense of destruction will no longer be turned inward in fear. The art that utilizes the destructive processes will purge, for as it gives death, so it will give to life.

Transcendence is for the living, not for the dead. It is the symbolic sacrifice that releases one from the weight of guilt, fear, and anguish. It is the sacrificial action which releases and raises one to the heights. The sacrificial process in art is one in which a symbolic act is performed with symbolic objects for symbolic purposes, initiated by the need to maintain unconscious integrity.

The dynamics of our unconscious integrity is fantastic. It arranges content in terms of a thousand eyes for an eye, boils death and destruction for the trespasser, maybe not now, maybe not today, but some day, by God, we’ll get even, even if it means headaches, allergies, ulcers, heart attacks, or a jump off a roof. Just you wait and see. Someday we’ll all get even. “Every dog has his day,” and when the real dog has his real day, what will he really do? Will he push a button and annihilate 200 million people, push an old lady down the stairs, join the Ku Klux Klan, expose his privates in public, or simply walk the dog to defecate on the neighbor’s lawn? When the need for unconscious integrity is actually worked out in the actual world with actual people, actual things occur. There is actual conflict and actual destruction. The real moving car driven by the real driver who does not really see the real child who in turn does not really see the real car while crossing the real street, is really killed, really dead. The police cover him with a real white sheet and draw a white chalk line around him. I didn’t do anything. I just watched. I didn’t even get sick. I didn’t even throw up. I just got really afraid. The car was big and made of steel, but I’ll get even some day. There are other real possibilities, less drastic ones, possibilities which have a more essential displacement, a greater distance. The real car might have run over a real puppy or with still greater symbolic distance, a real cardboard box. ‘The real child might have simply bumped into a parked car, bruising himself slightly, or crashed his toy car into one of his toy dolls.

Just as displacement and distance are an essential and necessary artistic means which enable the artist to submerge himself in the chaos of his destructive internal life and achieve an artistic experience, so too it is essential that the encounter between the artist and his material be close and direct. The artist must utilize processes which are inherent in the deep unconscious life, processes which will necessarily produce a regression into chaos and destruction.

A displacement and parallel process exists between man and the objects he makes. Man, like the objects he makes, is himself a result of transforming processes. It is therefore not difficult to comprehend how as a mattress or other man made object is released from and transcends its logically determined form through destruction, an artist, led by associations and experiences resulting from his destruction of the man-made objects, is also released from and transcends his logical self.